Update #3 The Search for Materials! 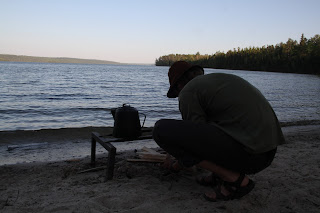 We have been here for only 20 days and have already done so much.  We have collected enough materials for one small birch bark canoe, gone on two 100 mile canoe trips in our 25ft birch bark canoe, seen many friends and ate much fish (all of which was given to us by people on Bear Island).

Before arriving on Bear Island, we were greeted by Joe Kat, the second chief of Bear Island, who has been more than generous to us and has helped us settle in and make a little home and building site for our selves.  Joe’s kind and inspirational words and stories have given us food for thought as we paddle and hike the bush of the Temagami area looking for materials. 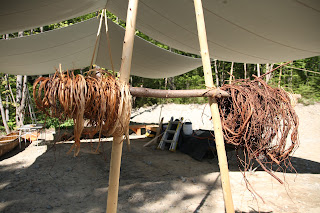 The Search...Gathering enough materials to build several birch bark canoe is a daunting task.  Not only do we need hundreds of feet of spruce or Jack Pine root, but we need A LOT of birch bark and straight grain cedar.  Thankfully Dan Cooche, a local canoe builder, who builds birch bark canoes but has never built one on bear island has given us a fair amount of Jack Pine root.  We have never used Jack Pine root, only spruce root but this new root seems much easier to work, less small tap roots and straight and clear for over 20ft!  Dan must have spent at least two days of work digging the roots and for him to give them to us is truly an honor.  Dan has also decided to build a birch bark canoe with us.  He will set up his building space right next to ours, sharing a tarp and fire we will have the special opportunity to learn from an elder canoe builder.  This is an honor and a special opportunity as John and I have never built a canoe with another birch bark canoe builder. 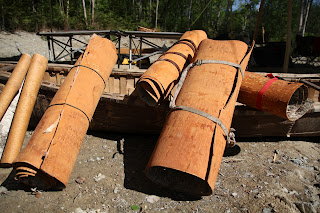 Finding quality birch bark is no easy task.  We figure we have to test/inspect 100 trees before we find one suitable birch tree.  When looking for birch bark we determine the tree’s bark quality by making a small cut in the bark and testing it’s pliability.  We also inspect the tree for scars, fungus, branches and the tree’s straightness.  Any imperfections in the birch tree will result in imperfections in the final canoe, thus perfect birch bark must be found to make the perfect birch bark canoe!

Yesterday we went to Temagami Cedar, the local cedar mill.  Although we have found some cedar in the bush, the most sustainable form of gathering cedar is to use the scrap/waste logs from a cedar mill.  As we are building smaller canoes our ribs only have to be a maximum of 4 feet and the butt’s of the logs work perfectly.  So yesterday we searched through the log piles and got quite a bit of nice straight grain white cedar.  Alex Paul, the owner of Temagami Cedar, has been kind enough to donate all of the cedar we need, as he knows this cedar will be positively influencing the young people of his band, the Temagami First Nation.

One of the most amazing things we have done since arriving in the Temagami area is paddling Shishcan-Chiman, our 25ft birch bark canoe, back to where it came from.  Last week we visited Alex Mathias out at his home on Obabika Lake and paddled the canoe to Shishcan-Obigong or Spirit Lake and up the Wakimika River, where we gathered all of the materials for the canoe.  How many canoes can be paddled to the exact place where they were created; not only built but grown and harvested.  It was a powerful experience. 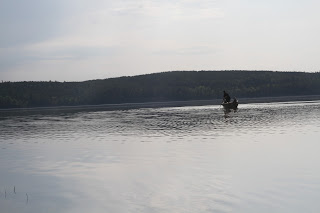 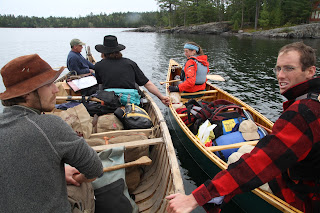 Portaging the canoe after it has paddled for several days soaking up gallons and gallons of lake water along the way is no easy task but we were successful and upon completion of one of the harder back breaking portages, John immediately busted out 20 push ups after flipping the big canoe down into the water.  Portaging this canoe makes us feel as close as we can to the historic voyageurs who traveled and portaged the very land we are traveling now.

For the past few days on Bear Island we have begun working with and teaching the young people about birch bark canoes.  We have hosted the pre-school toddlers, elementary and middle school at the canoe building site behind the baseball field.  Activities have ranged from peeling spruce root, drawing different styles of birch bark canoes, to after school baseball games.  Not only will we be a highlight of student’s day at school, It is clear our project and our baseballs and mitts will also be a valuable after school option for many students. 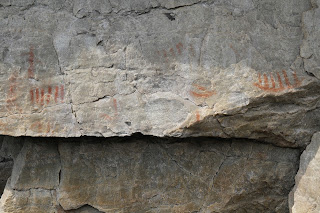 The Power of the Canoe is showing it self in many ways, from getting young people excited about their heritage to helping a family with a missing son.  Towards the end of our latest material search trip, we found some clothing items of Daniel Trask, who has been missing since last November.  We didn’t find Daniel, only some clothing but we know his spirit is with the land and he is where he wants to be, no matter where that is.
Posted by Voyages of Rediscovery at 6:04 AM

The Mission of Voyages of Rediscovery

To facilitate educational expeditions on the Columbia river. Using 30ft. voyageur canoes as a medium for education and exploration, Voyages of Rediscovery gives students a new found connection to their ... "Backyard River."

www.VoyagesofRediscovery.org
Please visit our website!
There is an extensive amount of information about our Educational Expeditions and about what we do.
Voyages of Rediscovery